Well I made it, the first full week back at work of 2022, and it's been a busy one as the kids went back as well, everyone is tired and worn out and looking forward to the weekend but on the whole it's been a great start to the year on my workbench... 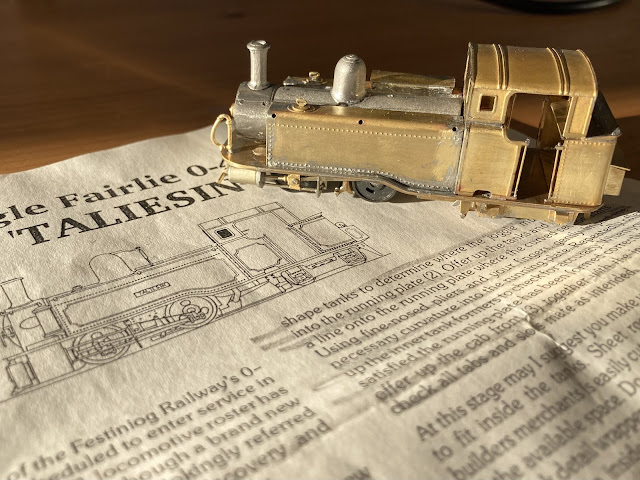 As well as lots of new enquiries I've been working hard on a few of my pre-Christmas commissions - many of which have been finished (see the 'Commissions' posts this week). As well as those however a few others are making steady progress. I'm really enjoying the variety at the moment, from wooden craftsman kits in G-scale (below) to fiddly brass kits in 009 (above) with weathering all scales and gauges in between! Touching on specifics, Taliesin looks more complete than she is, above, as I'm yet to fit the motor, drive shaft and then pickups. That is the next job, but generally speaking the bodywork is complete now, and almost all the fiddly jobs are ticked off - which is a relief - and she's looking pretty good in my opinion, models like this always look exciting in the raw, when you can see how they've been fashioned of flat etches and castings, leaving traces of the designers hand in your own work. Wonderful stuff! 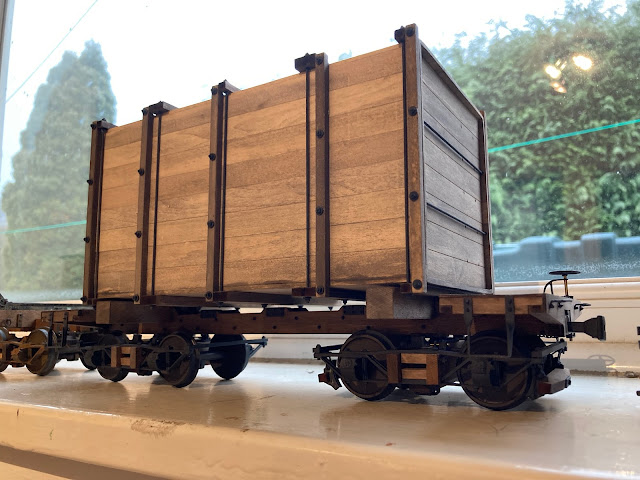 I mentioned G-scale wooden craftsman kits, this water tank car is humungous and is nearing completion as well - just a few more details to add, and then a discussion with my customer over it's 'finish' and if I will be adding any further weathering. The finish has been achieved with washes of oil paint over the wooden components allowing the grain to show through. It is unlikely a car like this would have been painted, and I like the pale worn look this provides.

In 2001 I visited Nova Scotia and Newfoundland, and it was on the latter at a wonderful place called Trinity Loop that I encountered Canadian National GMD G8 '802' (now scrapped I believe after the collapse of the theme park). I shared some slides I took at the time in a blog last year (some better scans are now available on my Flickr). I clambered all over the locomotive, feeling excited to be so close to recent history, and imagining the journey along the scenic (but traffic poor) Bona-Vista branch. To this day I've always wanted to model part of the branch railway in Newfoundland. I've considered importing resin models from Brazil, or RTR models from Australia as a way of creating a G8, but it was a chance encounter with a generic EMD G8 download on Thingiverse that started this latest chapter. I was able to download, for free, a body, chassis, truck frames and fuel tank parts and have since before Christmas been reverse-engineering these STL files to better represent a GMD example. I've moved grills, removed windows, tidied up the polygons, changed panel lines, updated the exhaust - there is still so much to do but it's a nice distraction in front of the fire in the evening, an hour spent on the laptop doesn't always glean so much productive work as this - which is nice. Still to do, modify the cab doors, add the class lights and finish the number boards, add door catches and then work on the separate chassis, removing the rivet detail and panel lines, before adding Canadian specific detail and some pilot holes for handrails. My intention is to then design an etch of metal parts including stancions and grills for the radiator to finish it off to a high standard. The model is H0 but could be produced in a smaller scale, so the question is do I go for H0 on 12mm gauge, or look at using an approximation on N gauge track? 2.6mm to the foot works out at 3'6", and it's the scale I used for the WP&Y locomotive I did a few years ago? 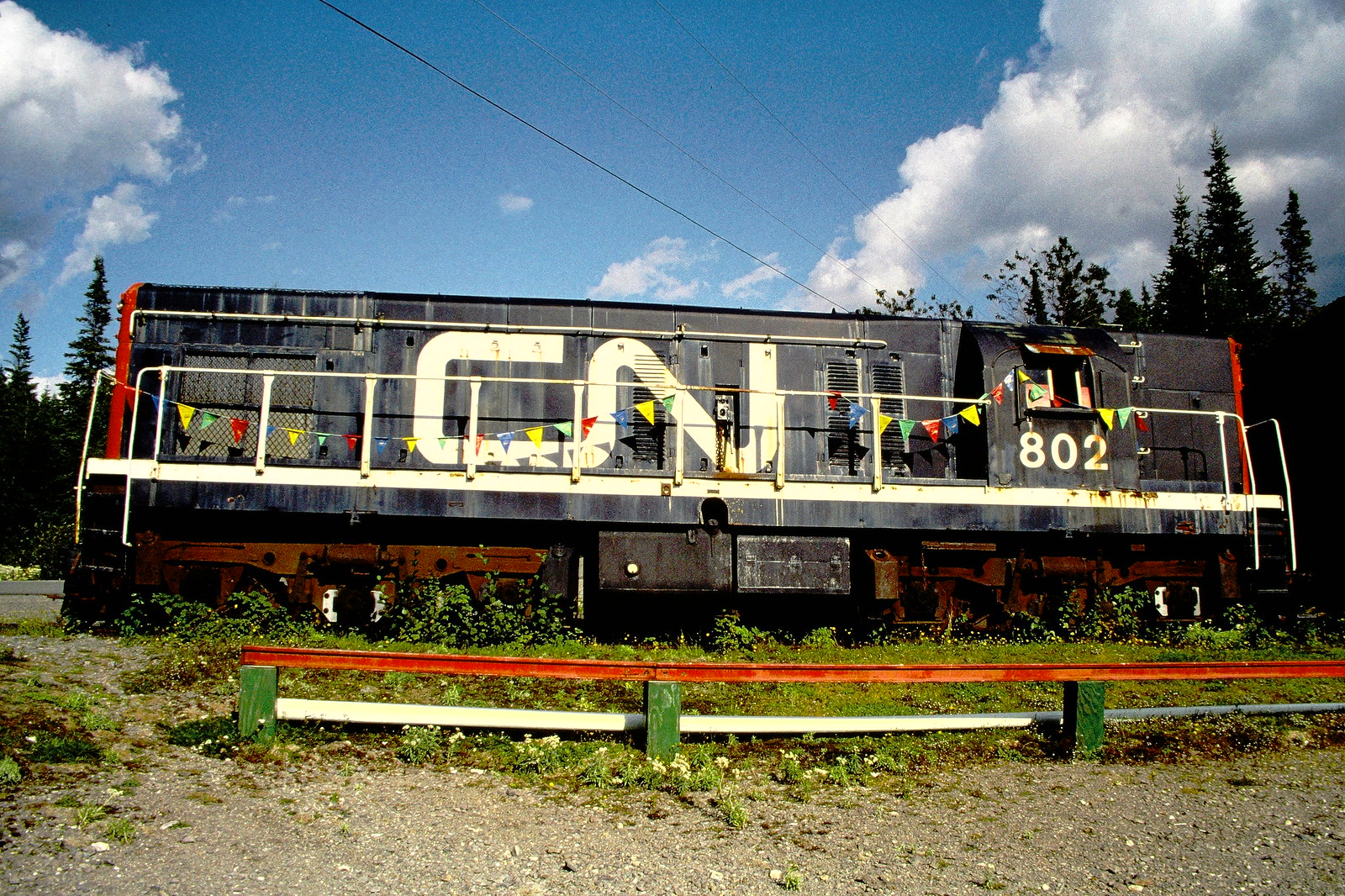 In other news, a parcel arrived from Chris in Canada, a second hand Walthers/Roco FM H12-44 - destined for Bear Creek. This model was duly tested and what a beautiful runner! It's 'vintage' suits the layout perfectly balancing well with the MDC Shay. I have a plan to replace a little of the moulded detail and add some of the missing parts, as well as fabrication of the handrails that are all missing. That said it was dunked in some IPA and scrubbed up pretty well - expect to see more on this in a separate post at some point. 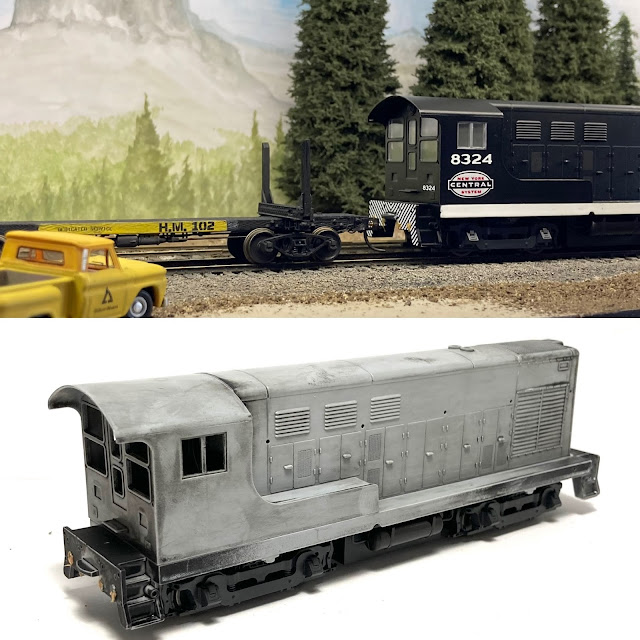 It's been very cold in the workshop in the evenings this week, but I did manage to finish assembling a third Branchline Trains 50ft box car. This one is destined for a long journey! After I paint it up as a TerraTransport HSWR car I'm giving it to Andrew Underwood in Calgary to run on his Cape Breton and Central Nova Scotia layout. It feels good to share this hobby with friends across the world, and why should distance mean we can't treat this more like a local club where we might share models with friends? 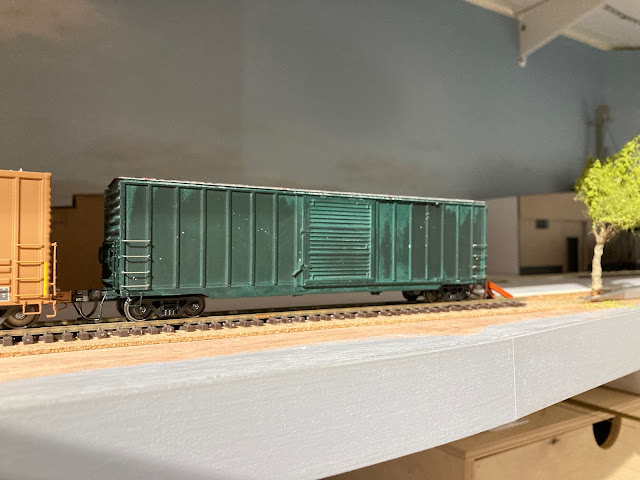 I've also been studying photos in my Gary Durr book on logging railroads, not the trains this time but the trees and the undergrowth. I'm working my way up to beginning work on the greenery of Bear Creek which is a job I'm nervous about, but keen to experiment with this weekend. Whatever you gave planned this weekend I hope you have a well earned rest. Until next time, more soon...

Thank you for leaving a comment on my blog - I appreciate you taking the time to share your views. James.